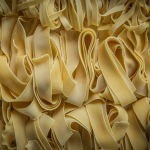 Until the end of June, anyone celebrating an anniversary or birthday that involves the number 13 – it could be a 13th birthday, 13th wedding anniversary, or an anniversary that falls on the 13th of the month – is invited to enjoy a free pasta at either Lucio’s in Darlinghurst or Zetland after showing proof of your anniversary.

Join our Newsletter & Get a Free Gift For Your Birthday